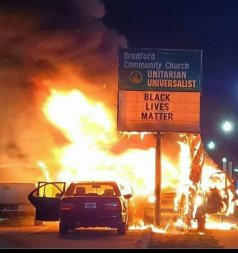 You should already understand this is a setup… right?

The Soros/Clinton/Obama New World Order machine is in bed with the BLM and ActBlue movements, which are collecting useful idiots. That is what Stalin called low intelligence people who can be convinced to go act out based on the propaganda they are fed. These people are easy to find. Any kid who liked to torture small animals or stick firecrackers anthills and never grew out of it, is a good candidate. “Here’s bus fare to a new city, go have some fun smashing cars, burning buildings, and may score a new pair of Nikes or TV out of it. This is all to help show your hatred of the president and prevent him from getting elected.”

Does any one really believe that this is hurting the presidents chances? There is no way Soros, Obama, Clintons, could believe it. Only the useful idiot could.

So, what’s next? Trump wins, and they tell the useful idiots “It’s a fascist takeover! You will see military in the streets. Go out and fight harder! Destroy everything you find!” Remember, ‘Burn it Down’ is a phrase we’ve heard them say more than once.

Naturally, this destruction and anarchy will lead to the national guard… Military in the streets as they said. So it’s really a self fulfilling prophesy.

In an alternate reality, Biden wins, and Harris becomes Bidens puppet master. At least until he’s removed, probably forcibly, by Harris’ puppet masters. Then they control the marionette strings of Harris. Then say goodbye to most of the bill of rights.

They say democrats play checkers while Trump plays chess. Well, Pelosi, Schumer, Cortez, Omar, Talib, and those others may be dimwits that play checkers, but the Soros, Clinton, and Obama NWO are playing chess… Right up there with Trump.

Unless we also want to take to the street and commit the violence we say we despise, the best we can do is vote… and give Trump a landslide.